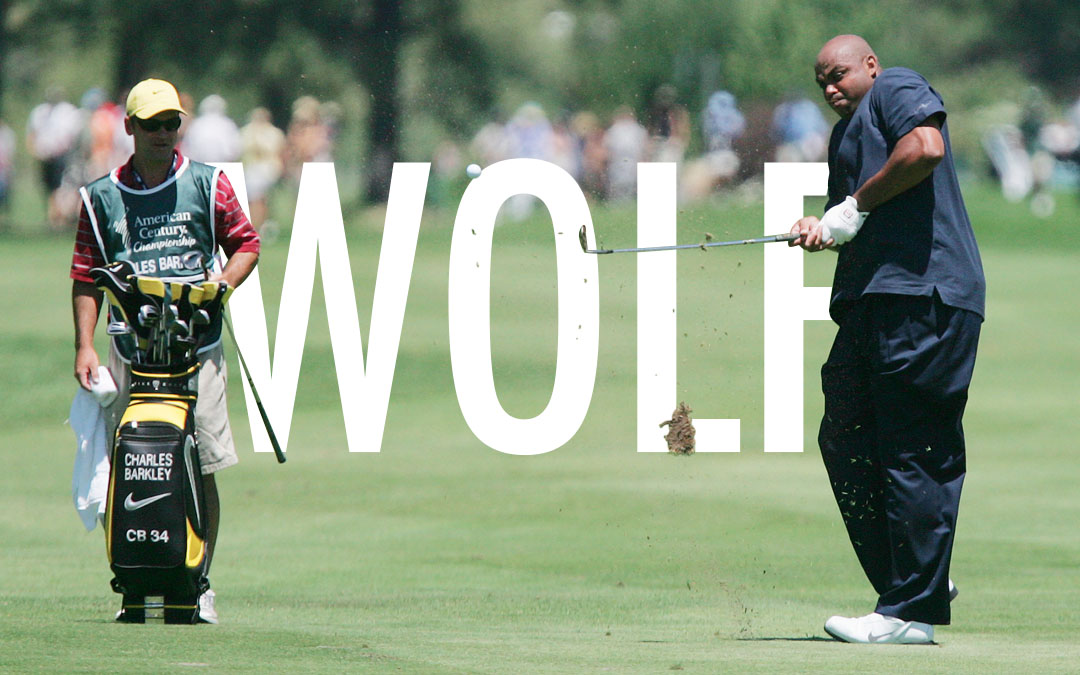 The sun is on the horizon, rays glistening off the dew perched on that creeping bentgrass. The phone buzzes and your squad has just rolled up in the driveway with the clubs, cooler and a wad of cash in the their back pockets. Tee time is at 9am and you’re ready to harness your inner 2000 Tiger Woods (a far cry from last weeks Charles Barkley performance).

The game today is Wolf.

Wolf is a strategic four player golf betting game that that creates a different team or match-up scenario on every hole of the course. On each hole one golfer takes on the title of Wolf and chooses whether to play the hole out in gutsy 1-vs-3 fashion, or to partner up and play 2-vs-2.

First, determine the hitting order for the day, one through four. If you get to the course early this can be determined by some sort of putting competition on the practice green or you can throw fists in some sort of rock, paper, scissors affair. Whatever the determined order is, it will remain the same and roll over during course of the round, alternating tee shots (so if you are 1st to tee off on 1 you will be 4th on hole 2, 3rd on hole 3, 2nd on hole 4 and pack at 1st on hole 5).

On each hole, the first to tee off is designated as the “Wolf”. He/she will hit their ball and then proceed to watch the other golfers hit their tee shots. The Wolf must decided after each tee shot is hit if he selects that person as his partner. Once the next person hits the previous person is not available as a partner.

If the Wolf doesn’t like any of the other drives or feels he has a good chance to win the hole out-right, on his/her own, they can go at it alone and face off against the other three golfers for that hole. The side with the better ball score wins the hole (single best hole score – if the Wolf scores 5 and the others put up respective scores of 5, 7 and 4 they would beat the wolf with a low score of 4).

Example: if player A (Wolf) hits his drive. Then player B proceeds to blast it into the rough. Player C is up next, and hits a bomb down the centre of the fairway the Wolf may decided to partner up with C before player D tees off. Once player D tees off, player C is not available as a partner. If the Wolf claims a partner on the hole, then it is 2-vs-2 match for the hole, the wolf and his claimed partner against the other two golfers.

On every hole, the side with the lowest better ball score wins the hole. If it is 2-vs-2 then the golfers on the winning side each win the betting unit. But if it is 1-vs-3, the Wolf wins double or loses double.

– If the Wolf partners, for a 2-vs-2 hole, then the golfers on the losing side both pay $1 to each of the golfers on the winning side. (We’re using $1 just because it’s easy, obviously Wolf winnings/losings can add up, so be careful where you set the bet.)

– If the Wolf plays the hole alone, then the Wolf wins $2 (double the bet) from each of the three golfers on the other side, or loses $2 to each of them.

If it’s 2-on-2, then the golfers on the winning side each win the betting unit. But if it’s 1-on-3, the Wolf wins double or loses double.

A tie score on a hole in Wolf is typically declared a wash—no winner, no loser, no carryover, no money changing hands.

Wolf strategy is as much about self-confidence as it is about faith in a partner. A good player will go it alone as often as possible, especially on par 3s and par 5s.

With four people in the playing group this would mean an unfair advance for holes 17 and 18 given the rotation can only go through part way. What do you do in Wolf with those two remaining holes?

From Chi Chi’s book: “Because the 17th and 18th holes are left over after four turns of the rotation, the player in last place is generally given the courtesy of teeing off first and being the wolf on the final two holes.”

Want to add a twist or two.

– Add the ‘Lone Wolf’. You can announce before anyone tees off on that hole that you are playing the hole 1-vs-3. This decision triples the bet.

– Along with each hole wager you can add an overall round wager or even front 9, back 9 wager. This forces you to monitor hole wins and adds another layer of strategy.

– If you’re not too in the bag you can have a side game of “Bingo Bango Bongo” going. This game is based on achievements and being the first to do something on each hole. The first player on the green gets a bingo. The closest to the pin when all four balls are on the green is a bango. The first in the hole is a bongo. Each one is worth a predetermined amount (maybe $1 each from each player). If one player does all three first, then that player wins double.

And most importantly. You will want to be using these.